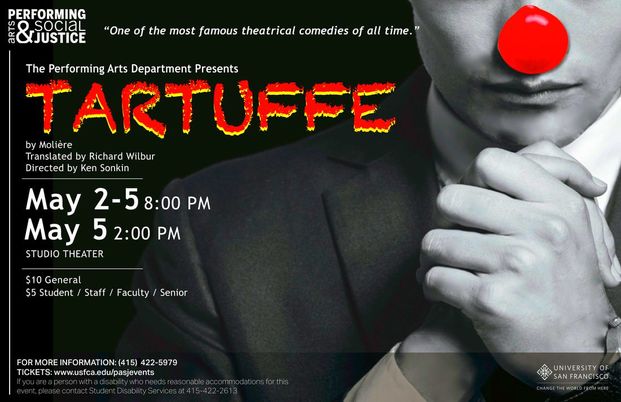 “One of the most famous theatrical comedies of all time.”
“The man of the house has lost his mind. That is the only possible explanation, his wife, their children and the maid believe, because Dad has gone all religious on them. He has fallen under the spell of a Christian charlatan named Tartuffe and simply moved the fellow in. That, they fear correctly, is only the beginning.”.—Anita Gates, New York Times
Modern dress, contemporary production.  Tartuffe, a self-proclaimed “holy man,” uses his seductive charms to disrupt a well-to-do family.  A sanctimonious scoundrel professing extreme religious piety, he worms his way into the household of the wealthy Orgon. Orgon falls for the impostor’s scheme throwing his family into chaos.  Tartuffe almost succeeds in his attempts to seduce Orgon's wife and disinherit his children before the final unmasking when justice is served! 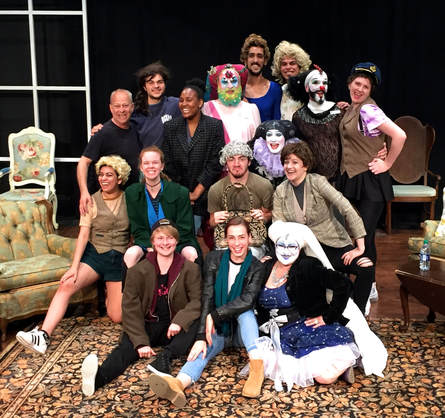 ​What a treat it was having these gorgeous members of The Sisters of Perpetual Indulgence spend time with our Tartuffe cast and crew at USF. Talk about Performing Arts and Social Justice! Smart, funny, irreverent... and on a mission to help people and spread joy. Thanks, Sisters! ​
Director’s Notes:

Ever seen a street hustler do the 3-Card Monte? The chances that you will correctly pick the right card and win money are slim-to-none. The odds are in the con man’s favor. There are sleight of hand moves, manipulations, and words that are there to deceive you and take your money. Nobody likes to be fooled… especially when it comes to one’s spiritual growth.

In the 17th century, Jean-Baptiste Poquelin, better known by his stage name Molière, observed similar con men within the Roman Catholic Church. Over time, he polished his comic writing abilities combining Commedia dell’Arte elements with the more refined French comedy. He saw hypocrites who ostensibly and exaggeratedly feigned virtue, especially religious virtue. By 1664, he penned one of the greatest theatrical comedies of all time, Tartuffe or The Impostor. Almost immediately following its first performance that same year at Versailles, King Louis XIV censored the play, probably due to the influence of the archbishop of Paris.

His rhyming verse was the perfect vehicle for illuminating the difference between false piety and true faith. His playful social commentary on the bourgeois was at once celebrated as a cautionary tale as well as a fun-filled romp. In all of his plays, Molière addressed similar social issues ranging from the corruption of medicine, the folly of marriage, the fear of God and mortality and everything in between. (The Misanthrope, The School for Wives, Tartuffe, The Miser, Don Juan, The Imaginary Invalid, and The Bourgeois Gentleman.) Considered to be one of the greatest masters of comedy in Western literature, Molière invented a new style that was based on a double vision of normal and abnormal as seen in relation to each other. Living in an age of reason, he had the good sense not to preach but rather to animate the absurd.

I’ve had a blast working with all of the PASJ students, designers, faculty, and staff in bringing this marvelous play to life. I thank them for their passion, their diligence, their humility, and of course their wacky sense of humor! Don’t sit back, don’t relax… get ready to enjoy— Tartuffe!