“Michael Patrick Gaffney is a tour de force in this delightful one-man show. A joy from beginning to end, 'The Oldest Living Cater Waiter' is original, well-served and easy to digest. If there were Michelin stars for theater, it would get three." --SF Examiner 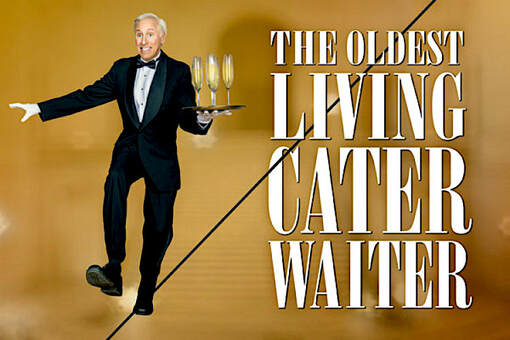 Photo by DC Scarpelli.
Hungry for some great theater? Michael Patrick Gaffney’s original one-man show, The Oldest Living Cater Waiter, offers up delicious insights into his complicated and hilarious careers as both a professional actor and a high-end waiter to the stars. Gaffney cooks up numerous characters from his past with just the right amount of sauciness, Shakespeare, and a soupçon of self-discovery. Come celebrate one man’s journey of a life in the theater.

Over the last few years, Cater Waiter has been developed at Berkeley Playhouse's Julia Morgan Theater, ZBelow, and SF Fringe Festival at PianoFight including winning Best of Fringe. ​It has received For All Events TOP TEN, Top 10 Picks of 2016, and Jumping Clapping Man’s.  Each time, the show has been generously supported with audiences going wild! 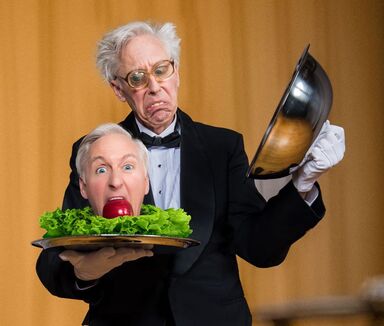 Photo by DC Scarpelli.
“Gaffney is a very compelling and charismatic performer, he plays himself revealing inner thoughts, embodies several different characters... this experience and his passion for theatre comes through in his well-crafted and brilliantly performed show. He is natural, hilarious, honest, a superb actor and raconteur, vulnerable –- very moving when performing serious dramatic speeches – yet he can also summon up full sarcasm mode with a delicious attitude! His acting, range of emotions, presence and fascinating personality are what makes Gaffney’s show so rich and deep. He has a great story to tell and he is utterly watchable –- leaving us, dare I say it ... hungry for much more! Hopefully this show will come to a theatre near you very soon.”
​—Fringe Review UK
​TICKETS: (415) 255-8207 or online at www.42ndstmoon.org

​Running time: 75 Minutes. No intermission.
​The Oldest Living Cater Waiter has previously been workshopped at Berkeley Playhouse, ZSpace (ZBelow), and produced at the
​SF Fringe Festival (PianoFight).
​Director’s Notes
​
"Life is a banquet, and most poor sons-of-bitches are starving to death!" —Auntie Mame

My dear friend, Michael Patrick Gaffney is feasting. His life is a banquet filled with oodles of sweet friendships, heaps of delicious artistic projects, and a few bitter tasting challenges. His story is your story is my story. His journey from a small-town Oklahoma boy to becoming a sought-after professional actor in the Bay Area is his dream come true. Audiences have relished watching him on stage for 25 years—but they may not know about the other side of his professional life—cater waiter to the stars.

Gaff (to his friends), is an old school performer with a humongous heart. He’s vaudeville, Shakespeare, and song and dance. He’s comedy and drama and everything in between, and like a fine wine, he has gotten better over time. The Oldest Living Cater Waiter is a universal story about finding the gusto to keep pursuing your dreams… and reckoning with the cost.

“What is there left for us, that have seen the newly discovered stability of things changed from an enthusiasm to a weariness,
but to labor with a high heart, though it may be with weak hands, to rediscover an art of the theatre that shall be joyful,
​        fantastic, extravagant, whimsical, beautiful, resonant, and altogether reckless?” —William Butler Yeats

Cater waitering is demanding work. Michael’s story sheds light on the physical and emotional challenges of being of service to others for over two decades. And yet, he has discovered how to balance the sweet and savory sides of both of his careers by remembering what he was taught early on. His plate is, indeed, bountiful.

“Find a job you enjoy doing, and you will never have to work a day in your life.” —Mark Twain

Now in our fifth year of collaborating on Cater Waiter, Michael and I are so thankful to Daren and Daniel at 42nd Street Moon for having faith in this story. Shout outs to all the Moon people who have helped him realize this production. We hope that you enjoy this delicious evening of theater.